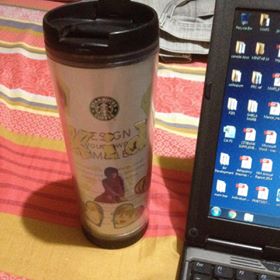 I just got back from the pharmacy store to buy some personal essentials and cough medicine. I'm all alone at home. My brother and his family moved back to his father-in-law's house while my parents are still on their way home from visiting my uncle in Cabanatuan. I decided to clean my Starbucks tumbler so I can store my water inside my bedroom. I have not used this tumbler since  my career shift to teaching. I have my own mug inside the faculty room so I never had the need to bring a tumbler. But earlier I bought a bicycle bottle holder online with thoughts of  bringing in my tumbler during my bike commute so I won't have to buy soda or any thirst quencher along the way.  After cleaning it and putting in potable water, I realized something. When I bought it about 9 or 10 years ago, I was in a state of emotional turmoil. Now that I'm about to use it again, I feel like I am in a similar state. So now I am starting to associate this tumbler with loneliness. Sort of.. Well, this is the adult world. Happiness is not independent from loneliness, as well as the other types of emotion. They exist along a continuum and one's state of emotion slides through it all the time. Somehow, it feels natural and yet unbearable at the same time. It's another journey and just like before, it will pass. For now, I embrace the possibilities and surprises that this new life will offer.  Oh hello darkness my old friend :)
Posted by kidd at 7:27 PM

In the time of cherries, anything is possible, and everything is to be anticipated.
Posted by kidd at 8:39 PM

My Name's Flying to Mars!

There was an episode of my life that comes into my  mind whenever I am faced with uncertainties of the future. When I was still very little, I was probably 5 or six, I was playing with my siblings, I can't remember what we were exactly playing, but in the middle of it, I suddenly felt a chill in my spine. For some reason, the thought of growing up popped into the realms of my thoughts. I remember seeking refugee in the corner of my bed, hugging my bent knees. The thought that one day, all those carefree days would disappear scared my very young mind.

That day is here. When I think about that weird episode, I realize that it must have been a premonition. To this day, I am afraid. Not of responsibilities, neither the failure to deliver those responsibilities, but the idea of not having a place to belong when everything fails. Gone are the carefree days. Now I have to constantly think of meeting and even exceeding expectations.

And what about my own aspirations? What happens when the person I visioned myself to be turns out to be too far-fetched for my own capabilities? I can't remember how many times I failed, but the restarting point is always scary simply because everytime it happens, I have no idea how to begin again.

I need my Nth aha moment. Oprah has been off the air for 4 years.

Where do I go next if all fails, which, the way I see how things are going, I will.

All I wanted is to serve my purpose in this world. A deeper meaning to my existence. Just when I thought I have found it, I am faced with the reality, it's not that easy.

Someday, this abuse of energy will cost me so much, I will regret it. As early as now I regret it. But quitting is not an option, not now. But how long do I keep on fighting and when do I give up? I may face failure in the end, and break my heart all over again.

Oh Peggy Lee, please answer me,
is that all there is?

Back in that loop...

I have so many things to do, work and school deliverables and deadlines to beat. But I've been staring in front of my laptop for hours and nothing really materializes. Why is that, I asked.

Also, I've been having a lot of philosophical discussions lately, and I realize this mounting pressure to confront an unresolved issue from my past is becoming more and more evident. These signs are telling something.

No matter how smooth the sailing has been, that missing piece will continue to haunt you.

I am tired... tired of speaking in puzzles.

But when will that courage come?


In the space between truth and lies, I started to disappear...
Posted by kidd at 4:19 PM

Calasiao Pangasinan's Saints Peter and Paul Parish church is one of the National Cultural Treasure declared by the National Commission for Culture and Arts. Like many historical structures of the Philippines, it survived devastation of wars and natural calamities. A baroque church generously ornamented with bricks, a heritage and architectural pride of Pangasinan, it is sure to draw and awe any curious tourist. 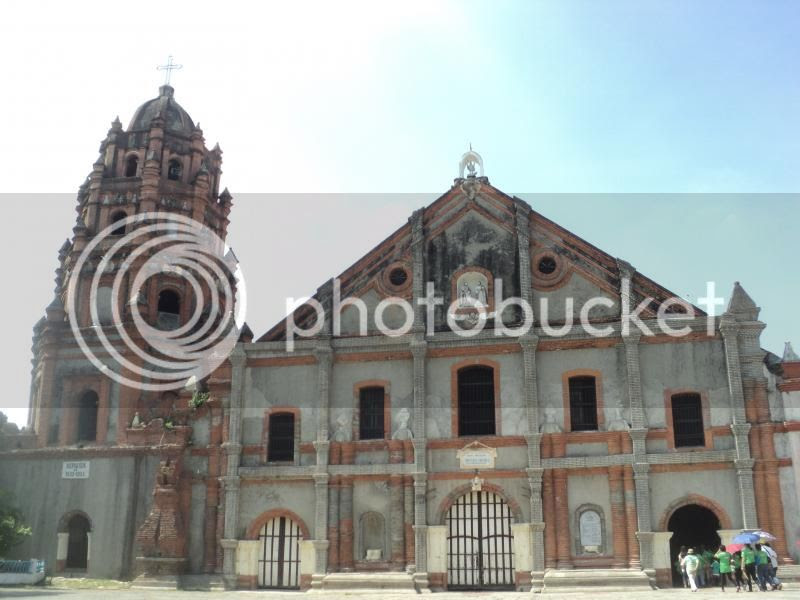 But on the right wing of the church, at the back of the convent, is a rarely visited and less popular attraction, a clay kitchen or "pogon" originally used by Dominican friars, I can't decide if it's really abandoned or neglected, but definitely on the verge of urban decay. 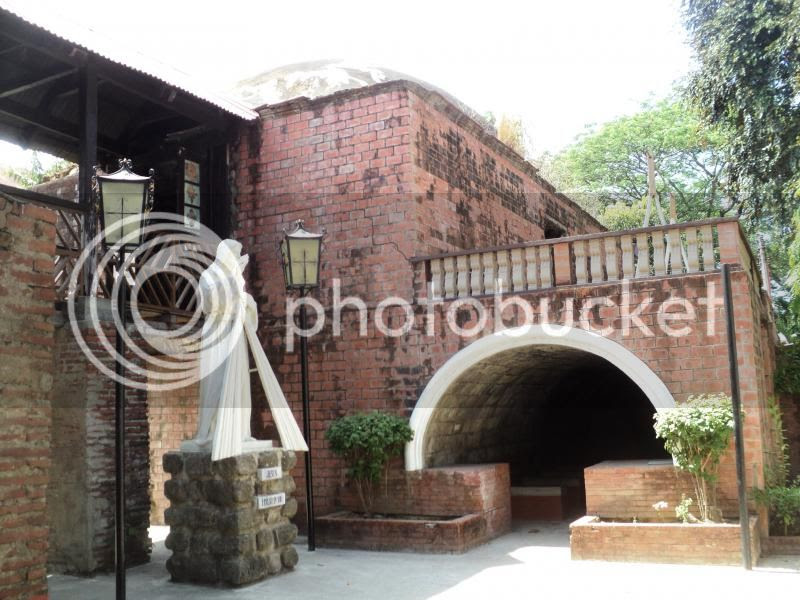 Covered with bricks and a dome roof, the clay kitchen is rather inconspicuous with attached cave featuring a nativity scene (it's inside) 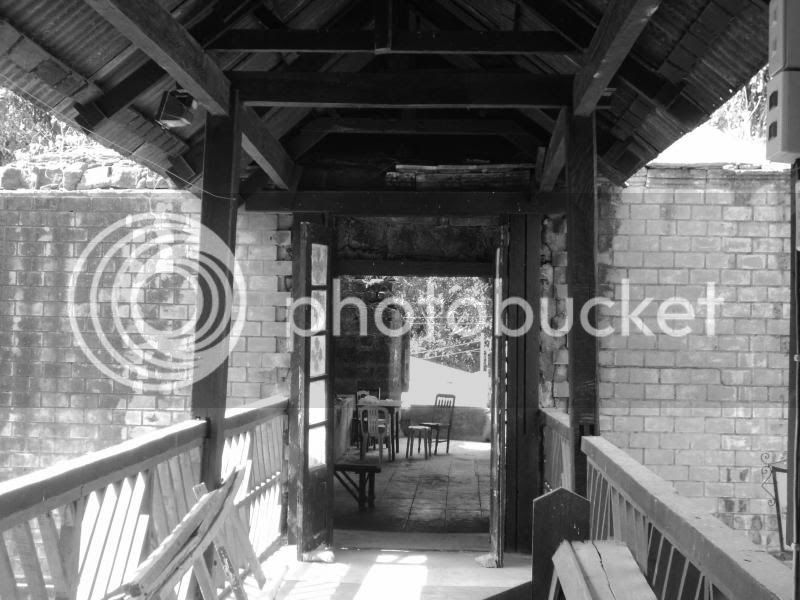 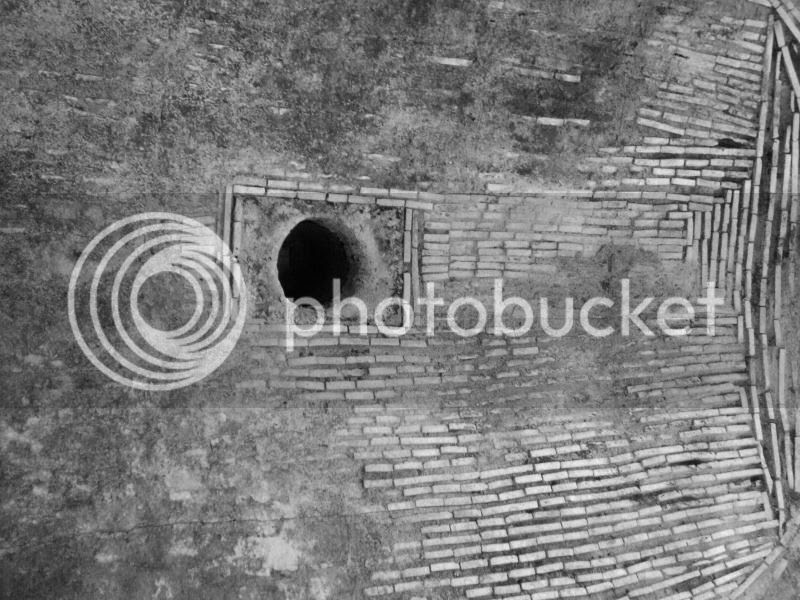 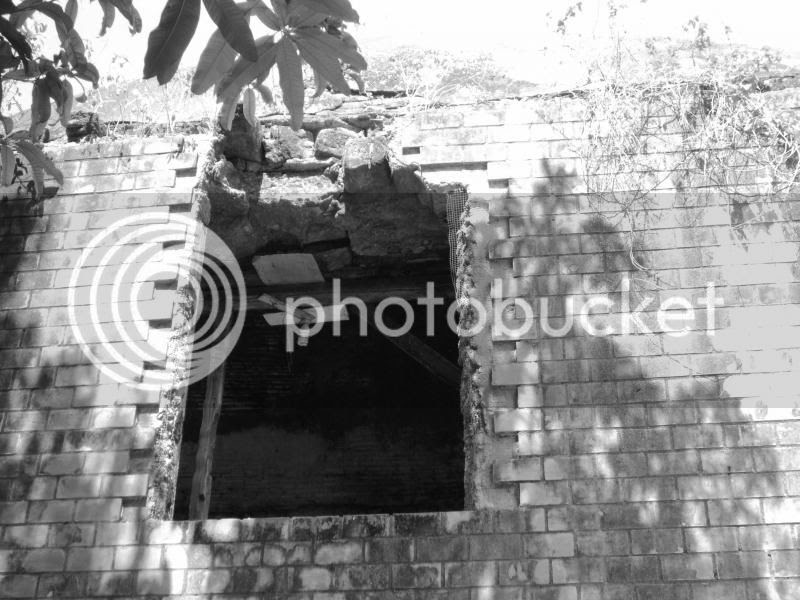 The presence of a fluorescent light bulb means the area is still in use... But nothing more than a storage of things that had reached their end of life stage. 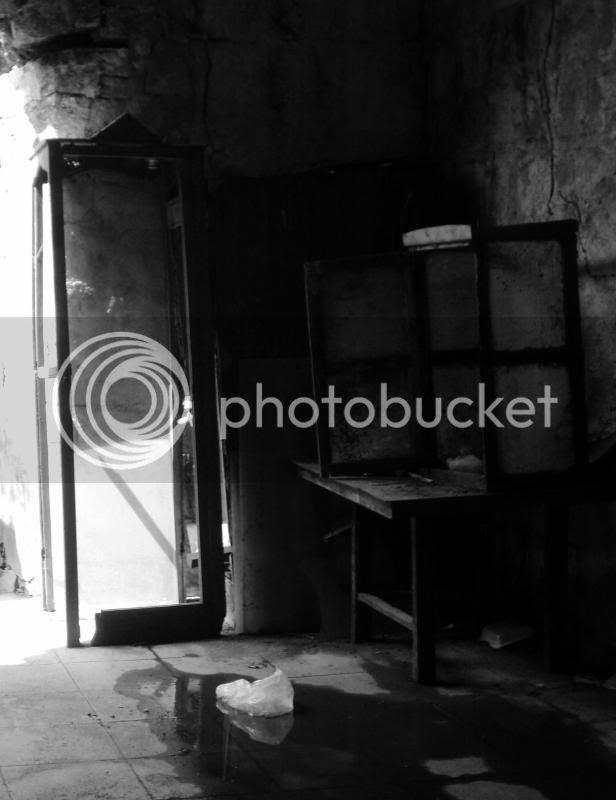 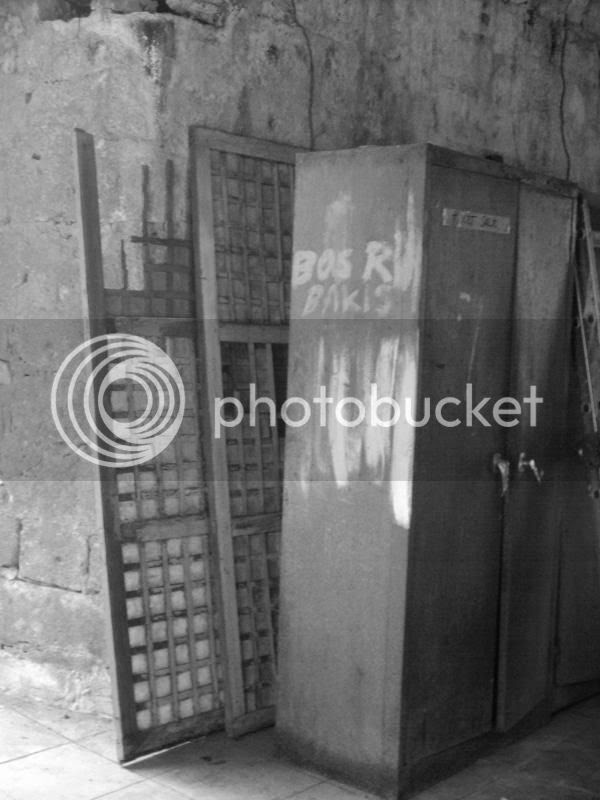 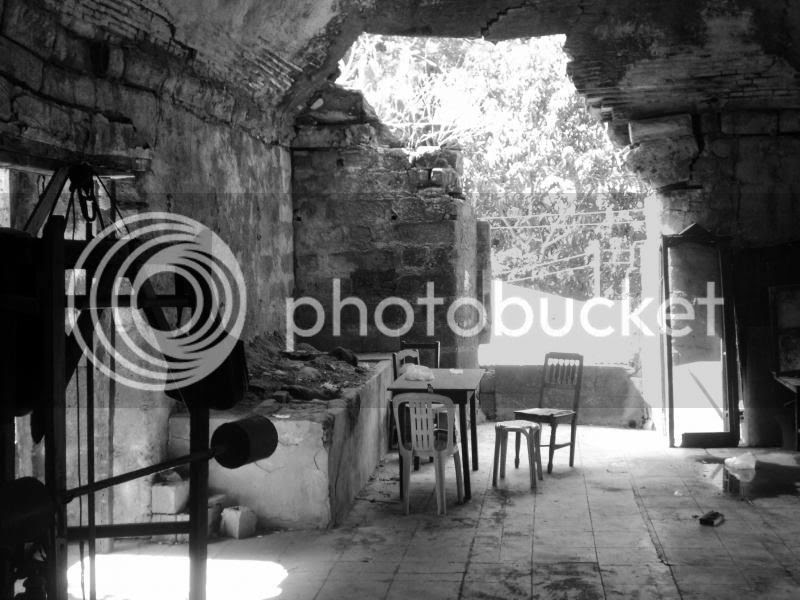 And perhaps of records not worth archiving? 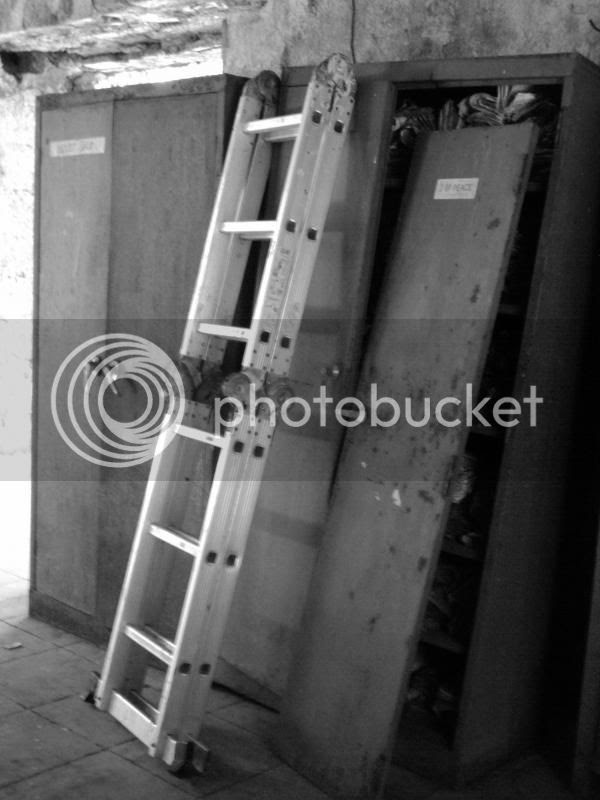 Gambling is prohibited in Catholic church, but when I saw this, Tong-its and poker are the first things that popped out of my head. 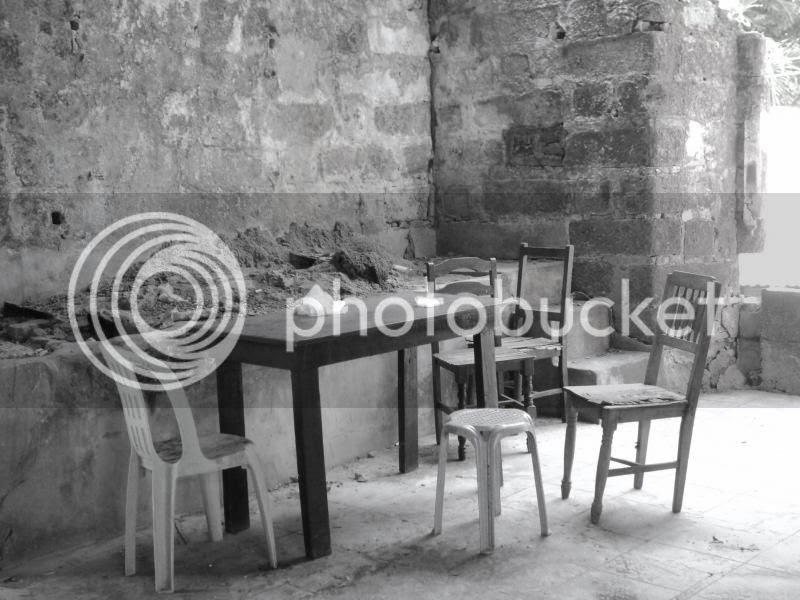 A funny story, in my desire to shoot a different angle of the structure from afar, I walked away from the back side to point and shoot, but the odds were against me when I hear threatening barks, I looked around and saw 3 dogs approaching me. I freaked out and run, thinking Pangasinan is among the provinces with highest cases of rabies. Ngiiii!!! Good thing I had an umbrella with me, I faced my pursuers and made a hiten mitsurugi  amakakeru ryun no hirameki stance (I like using big words when I can't describe something, rest assured that no dogs were harmed). It scared and stopped them from pursuing me so I was able to walk away without scratch. Whew! If anything, I realized doing a haikyo exploration alone can be dangerous.
Posted by kidd at 11:53 AM

My trip to Lingayen Panagsinan was an official business, naturally I didn't have the time to explore the place as I would have wanted to but I managed to make a very short side-trip when I saw a haikyo structure in the middle of the busy capital. The Casa Real is a historical building seated to another heritage structure, the Pangasinan Provinicial Jail. Its sorry state is appalling, if you only knew the history of the building. 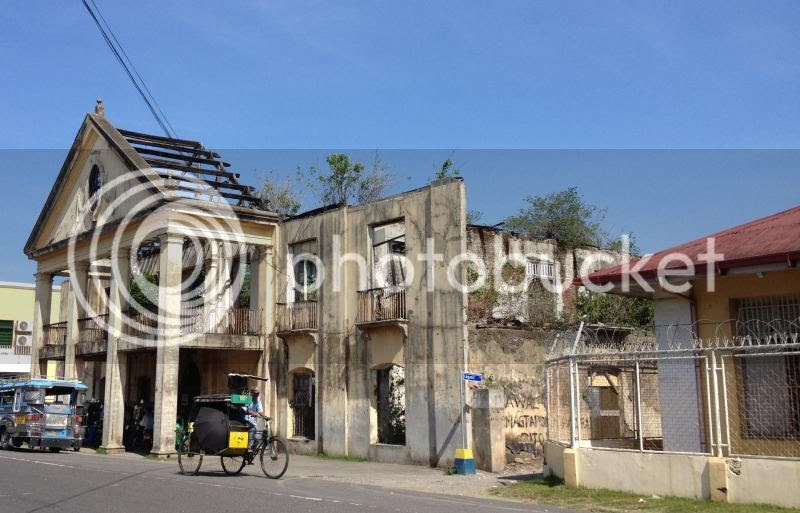 Casa Real literally means "royal house", built in 1840s and one of the first public buildings to be constructed with brick. The alcalde-mayor (functions as governor AND magistrate) resided and held office here. Later on, it was called the Gobierno, in 1886 when the position of Gobernador Civil was created to perform the executive function of the Alcalde Mayor and the latter retained his judicial function only. 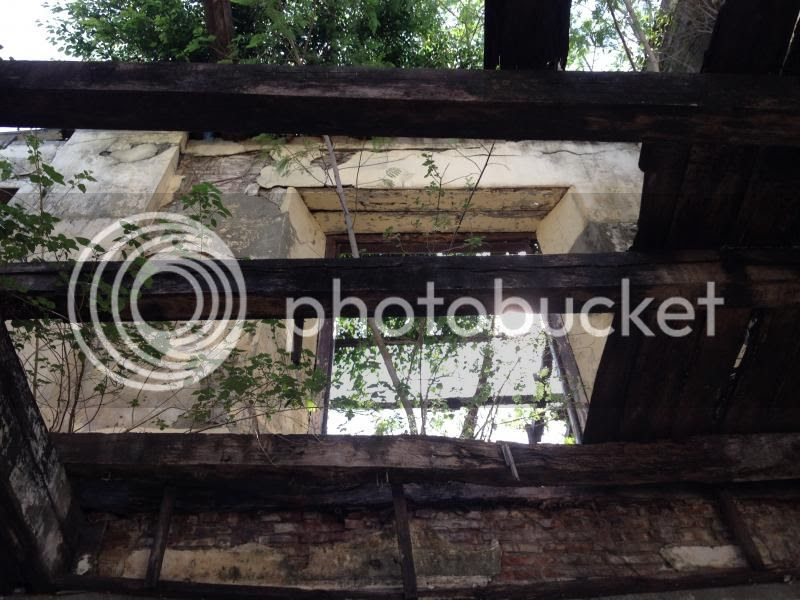 Looking at the 2nd floor, I can't decide if that's a door or a window 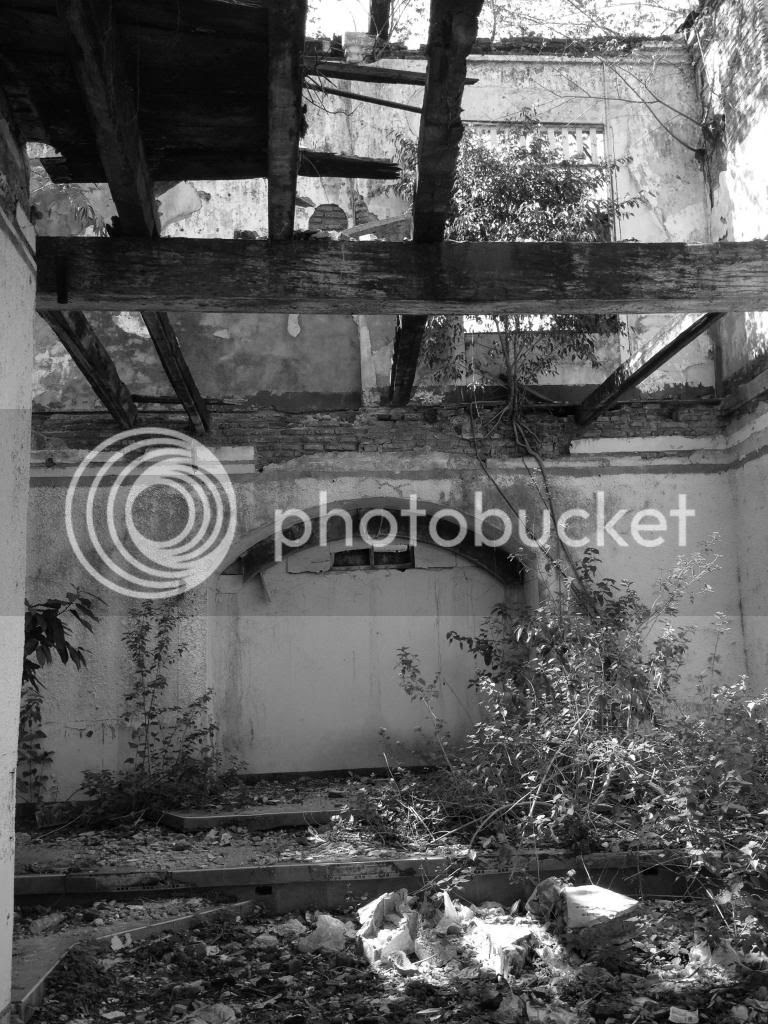 During revolution, the Spanish soldiers and the Voluntarios Locales (native recruits of the Spaniards who fought the Katipuneros) holed out at the Casa Real. On June 29, 1898, the Pangasinan Katipuneros planned to capture Lingayen by taking Casa Real. They secretly meet in the evening in Brgy. Domalandan and crossed the river to the Baraca St. but were detected prematurely and got massacred. This street is now called Heroes St. 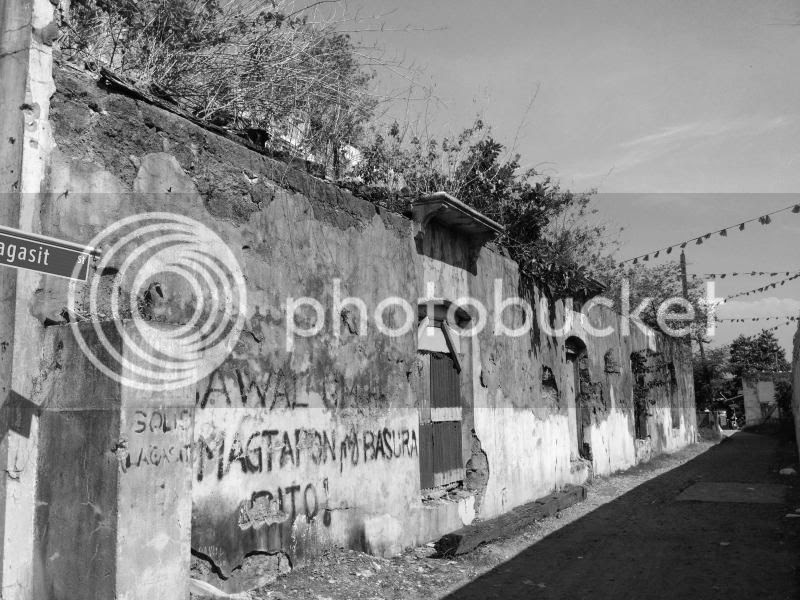 On February 16, 1901 Judge William Howard Taft and his three commissioners formally organized Pangasinan as a civil province, Lingayen remained the capital municipal because of the existence of provincial buildings there, Casa Real retained its capitol function.

In 1919, the capitol moved to its current location, near Linagayen beach, and Casa Real was used as a public elementary school for about three to four years before it became a Regional Trial Court. 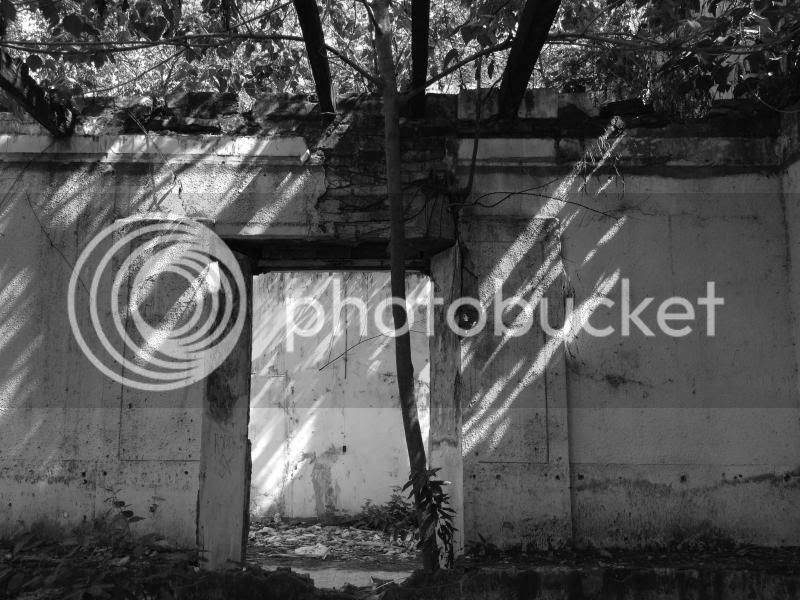 could this be one of the classrooms? 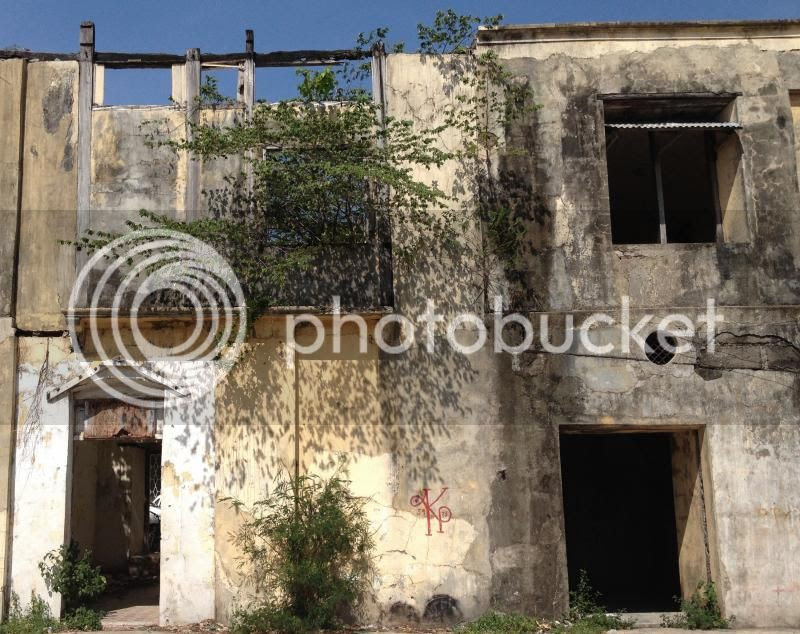 During World War II, the Japanese used the building as their office. After the war, when the new Capitol building needed extensive repair because of the damage inflicted by the American naval bombardment, the provincial offices had to move back to the Casa Real until the repair work was done. 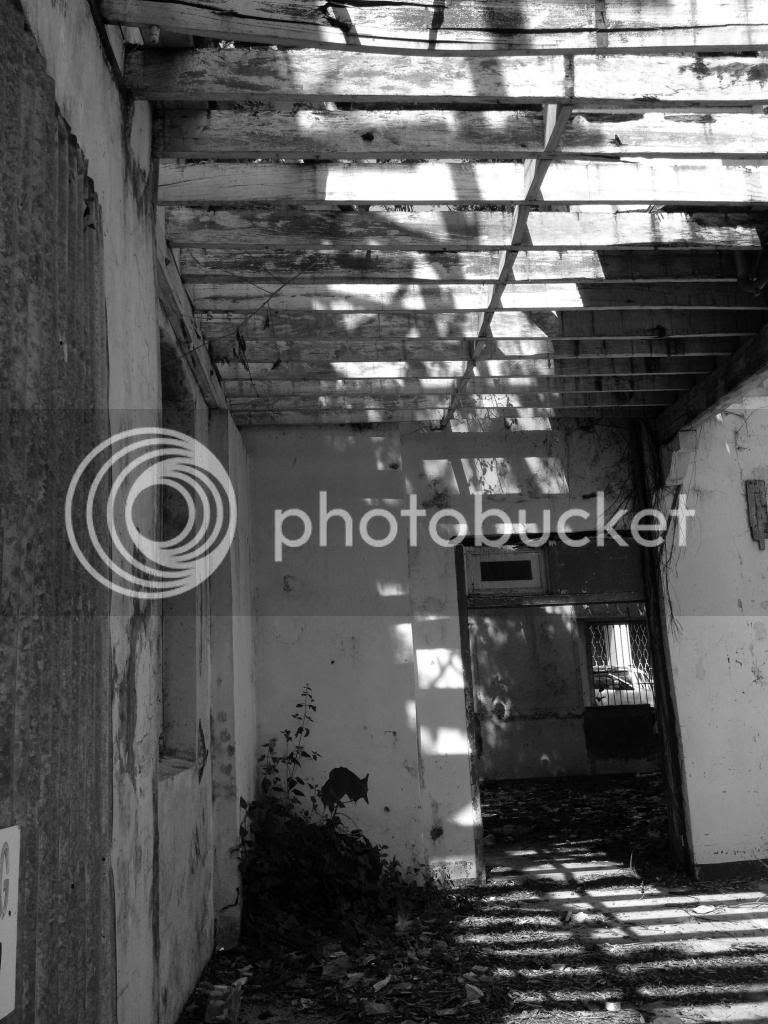 The remaining planks reminds me of an Inari shrine tori 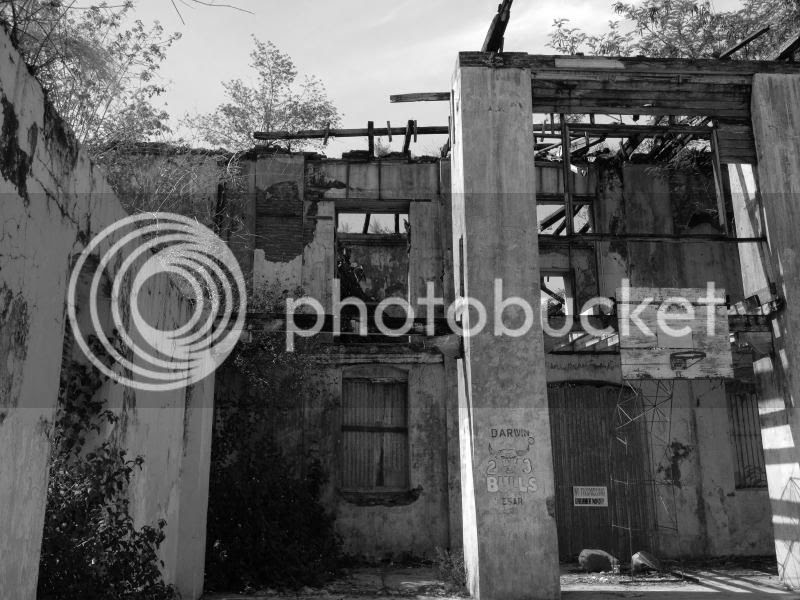 Surviving several earthquakes and the bombings of WWII, it was declared a National Historical Landmark by the National Historical Institute in 2002, with 95% of its original materials intact. But in 2008 super typhoon Cosme ripped off a part of its roof and looters saw the chance to steal  ballustrades, wooden floor planks, doors and windows. The municipal government offices occupying it, like Sangguniang Bayan, and DSWD,  vacated the place and it became an empty shell. 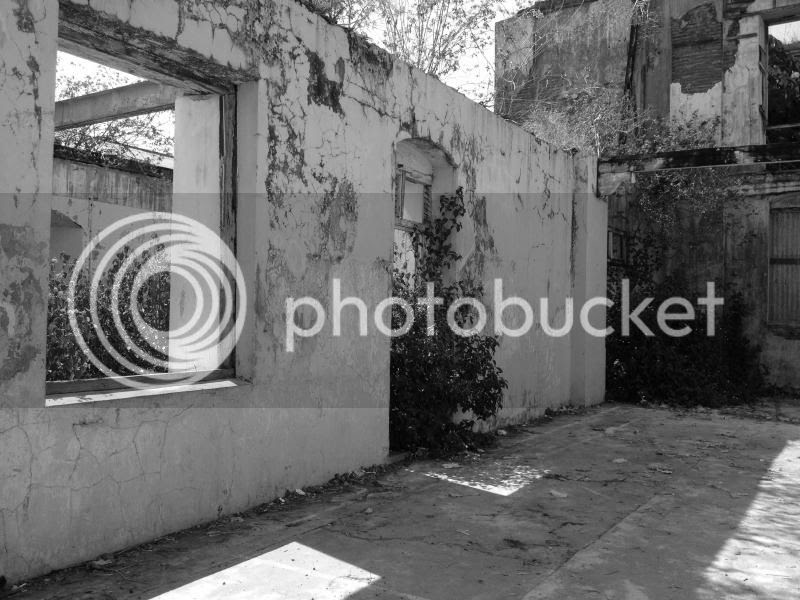 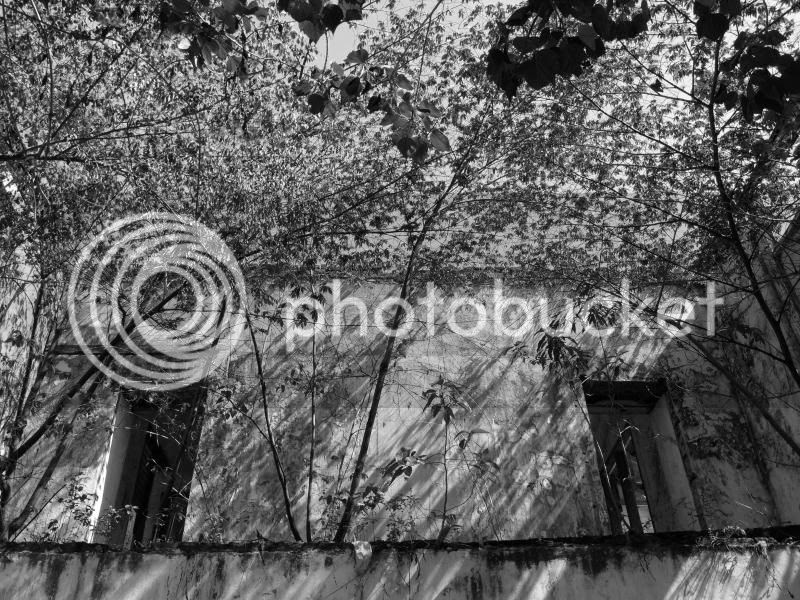 right now these plants are the occupants of Casa Real 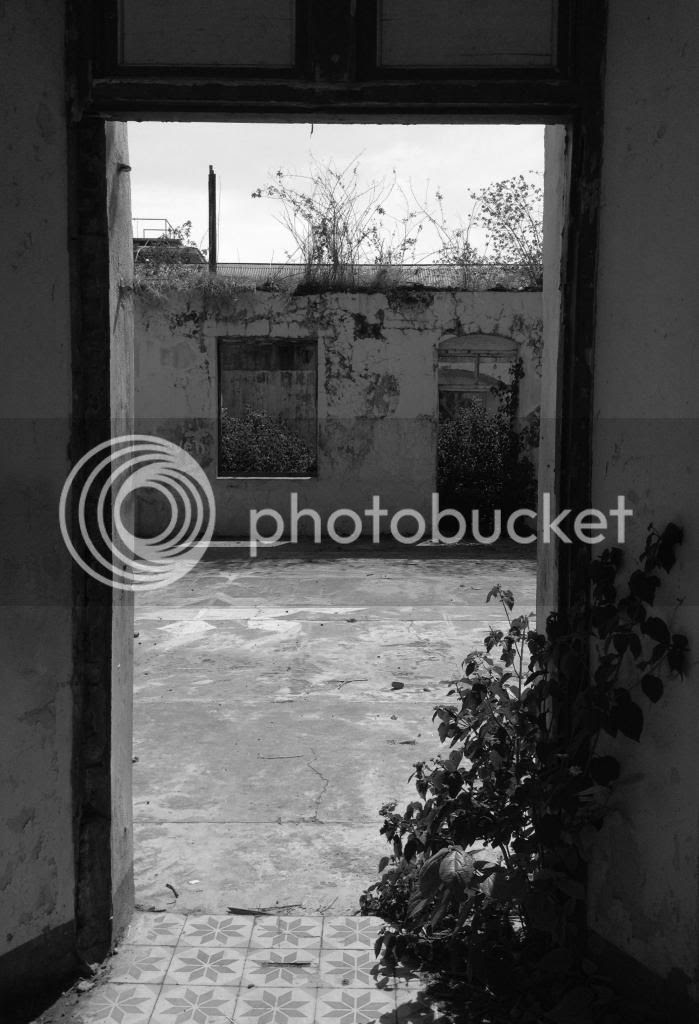 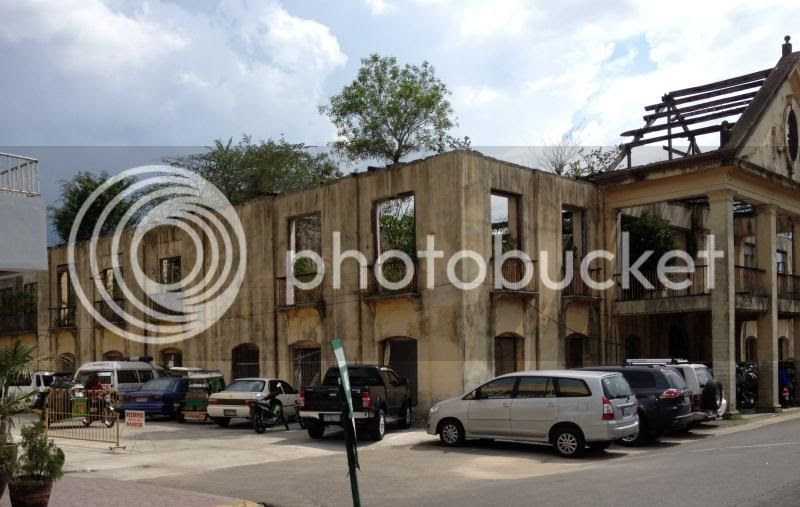 The Pangasinan Heritage Society, Inc. (PHSI) was granted permission to clean up the building and protect it from further vandalism while waiting for restoration. But after a year, PHSI ran out of funds to sustain the protection of the building and it was again vandalized by thieves who yanked out the remaining doors, windows and iron grills.

Several appeals were made to restore the building. In 2010, Governor Amado Espino pledged to restore it. The PHSI and Provincial Engineering took the remaining wooden materials for safekeeping. In January 2012, Congressman Leopoldo Bataoil (Pangasinan, 2nd district) agreed to allocate part of his pork barrel to restore Casa Real and the provincial jail. Then we all know what happened when the PDAF scandal blew up and now I don't know what the fate of this historical structure would be.

From trial court to basketball court?

I hope it won't be a haikyo for too long, It is a witness to many lives of different generations and a survivor of harsher times, it deserves to be restored to its old glory.

This is totally a joke, but if you want to take it seriously, go ahead :D